Schachter: Better to die than to believe in God 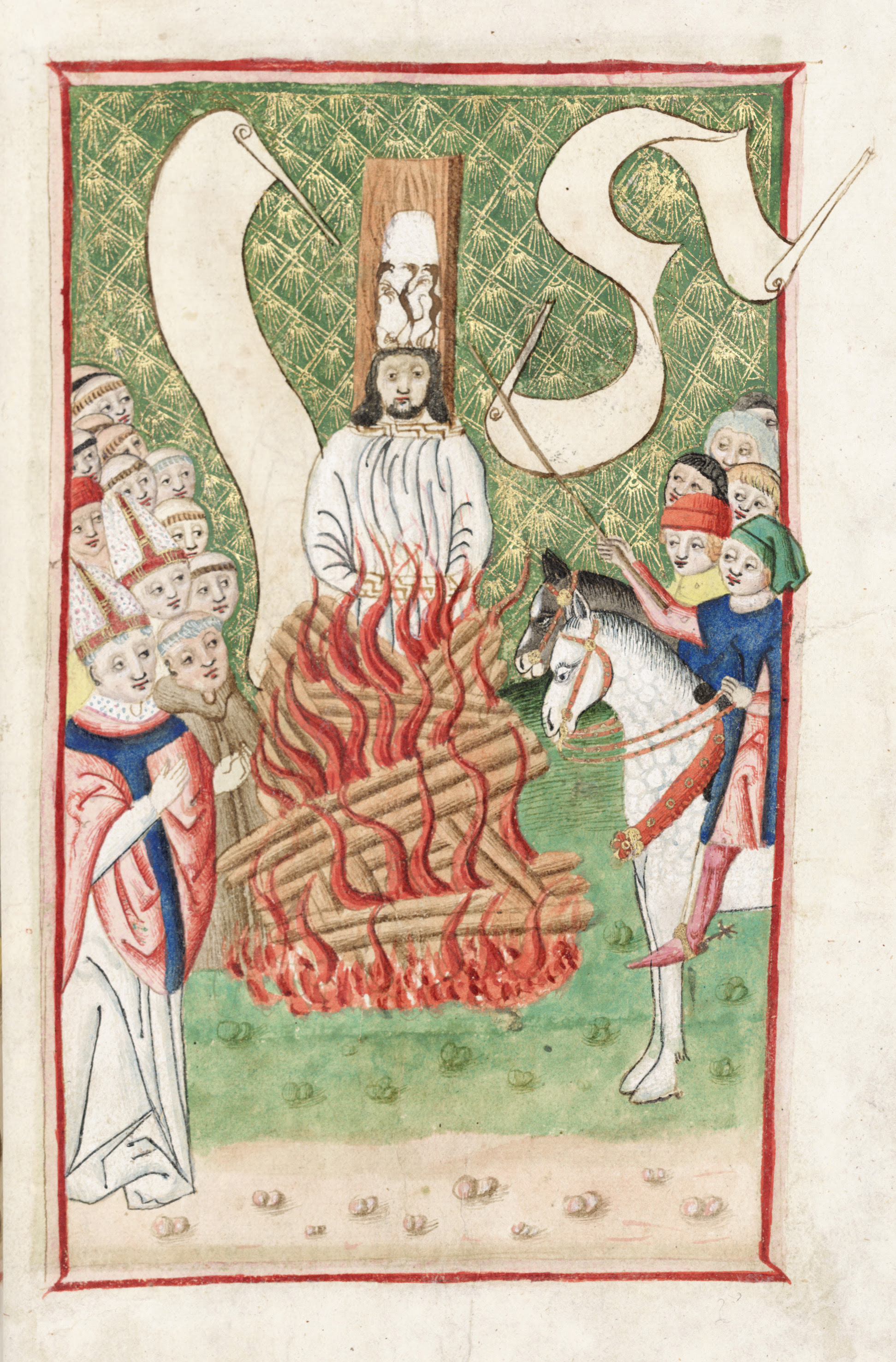 Well, I agreed with Hershel Schachter, rosh yeshiva of Yeshiva University, last week, but unsurprisingly, this didn’t last long. Cross-Currents reports that, at this week’s Rabbinical Council of America convention, Schachter taught a class on why women could not be ordained, and said that ordaining women was a yeihareig ve’al ya’avor (i.e., in the category of violations that Jews are commanded to die rather than transgress), “because the Conservative movement had made egalitarianism a key plank in its platform”.

First of all, if Cross-Currents is reporting his statement accurately, Schachter is wrong on the facts, and giving the Conservative movement much more credit than it deserves. The Conservative movement has always been timid about egalitarianism, treating it as a leniency rather than as a principle, and certainly not as “a key plank in its platform”. There are still a number of non-egalitarian Conservative congregations, and the movement doesn’t seem to have a problem with this.

But let’s look at the general principle that Schachter propounds, that any key plank of the Conservative movement’s platform becomes a yeihareig ve’al ya’avor for Torah Jews. One of the things that Emet Ve’Emunah, the Conservative movement’s “Statement of Principles”, actually does say is “Conservative Judaism affirms the critical importance of belief in God”. Therefore, anyone following Schachter’s opinion must conclude that it is strictly forbidden to believe in God, and that this prohibition is so serious that it is better to die than to violate it. Yes, some (presumably left-wing fringe) Orthodox Jews and congregations still believe in God, but we can assume that they will fall into line soon.

I can see the scene now: Schachter and his students giving up their lives al kiddush [REDACTED], having their skin flayed with iron combs as they say with their last breaths, “Hear O Israel: There is no God!”

It's been almost five years since I posted the Taxonomy of Jewish pluralism. Since then, it has become the foundation for the influential Hilchot Pluralism series (of which I can't take credit for any of the content, only for writing the ideas up and disseminating them around the world). From the beginning, the taxonomy was identified as a "work in progress", so I'd like to make a revision, inspired by rethinking some of this material in preparation for teaching a workshop on Hilchot Pluralism at this past weekend's Independent Minyan Conference.

The stages of pluralism were originally modeled on Piaget's stages of cognitive development and Kohlberg's stages of moral development. (Thanks, NYC Teaching Fellows, for the free M.A. in education!) That is, the premise was that a community's discourse would advance from one stage to the next to the next (or at least that a community is primarily in a single stage at any given time, and this stage characterizes all of its pluralistic discourse).

Now I'm thinking the stages are actually more like Erikson's stages of psychosocial development (which have previously been mentioned in Hilchot Pluralism, but then I was referencing Erikson's actual content; now I'm just drawing an analogy). That is, even when a community moves on to a new stage, the previous stages remain present.

Even if a community functions primarily in Stage 3, the Hilchot Pluralism series has shown repeatedly that there are many cases in which a Stage 3 solution is not possible. A solution in which no one has to compromise is nice work if you can get it, but in the event that this is not possible, yet the community wants to both stay together and maintain some sort of pluralistic approach on the given issue, it must seek some sort of compromise. This often means functioning in Stage 2 despite its flaws. And there are even cases when Stage 1 is unproblematic even for a community that ordinarily operates in Stage 3. For example, the two-table system may represent a Stage-3 approach to pluralistic potlucks, but if a community is having a catered meal (so that the different approaches to kashrut in participants' kitchens are not relevant), the Stage-1 "common denominator" logic (leading to using a caterer under kashrut supervision) may work just fine. And if Stage 0 is non-pluralism, every community has things that it is non-pluralistic about.

So is it time for a Hilchot Pluralism Part VIII yet? If so, what belongs in it? One question that people asked repeatedly over the weekend is how to deal with "Who is a Jew?" issues, but I'm not aware of any satisfactory pluralistic approach to the question (beyond Stage 1, which is quite unsatisfactory in this case). All the Jewish denominations have official stances on "Who is a Jew", and independent minyanim have the luxury of not taking a stance until it arises as a practical question. This means that if anyone asks the question in theory, an independent community can honestly answer that it doesn't have any official position. But that is no help if and when the question arises in practice.
Posted by BZ at 10:59 PM 8 comments:

Hey Marge, remember when we used to make out to this hymn?

I got back today from Mechon Hadar’s Third Independent Minyan Conference in New York, where I was representing Segulah. The conference included leaders of independent minyanim around the world (including several Jewschoolers), and there’s a lot more to say about it, but for the moment, I’ll just blog on a tangential matter:

Yesterday afternoon, the conference events took place in Kehilat Hadar’s usual space at the Second Presbyterian Church. During mincha yesterday, we started hearing the church organ from upstairs. At first it was just background noise, but then I listened more carefully and thought “Wait a minute, I’ve heard that before.”

They were playing a Christian hymn called “The God of Abraham Praise”, whose story I had learned about in a class at the 2008 NHC Summer Institute. The melody was written around 1770 for the Hebrew poem “Yigdal” by Myer Lyon (Leoni), hazzan at the Great Synagogue in London. The Methodist preacher Thomas Olivers was inspired by this melody and wrote very different words to it, and centuries later, they’re still playing it in New York. This Yigdal melody continues to be well-known in the Jewish world. (Until I learned its story, I had no idea that it went back so far; I figured it was just one of those shul tunes from the early- to mid-20th century.) Except that Jews tend to sing it much much faster. Listen below and then imagine it 3 or 4 times faster, and see if you recognize it!

I took a Shabbat nap yesterday afternoon, and once again dreamed about an analogy between physics and religion which made sense at the time, and which I am now trying to reconstruct. This time around, I was fully asleep, rather than in the liminal space between asleep and awake. I'm not claiming this is the next "Kubla Khan", but putting it out there anyway.

Background for people who aren't living inside my head: The Aristotelian concept of motion was that forces cause motion. In the absence of forces, objects slow to a stop. This was supplanted by Newton's Laws: In the absence of forces, objects at rest stay at rest, and objects in motion continue in the same direction at constant speed. Forces cause a change in velocity. Yet it is well-documented in physics education research that many people continue to hold Aristotelian conceptions. This is understandable, because from our experience of the world, we are familiar with situations where a force must be continuously applied to keep something in motion, and in the absence of that force, the object slows to a stop. The Newtonian response is that, in such situations, other forces (e.g. friction) are acting on the object to slow it down, and the applied force is needed to bring the net force to zero, so that the object can move at constant velocity. Physics education must bring students toward the Newtonian framework, but must do so in a way that helps them make sense of their phenomenological observations within that framework, and should avoid (as Edward F. Redish and David Hammer of the University of Maryland write) "the negative epistemological side effect that students learn to consider their intuitive knowledge and lived experience as irrelevant for physics learning; they learn to set it aside, rather than to draw on and refine it." Toward this end, curricula have been developed (at UMD and elsewhere) that focus on "refining intuition", to (e.g.) reconcile the Newtonian ideas with students' observations that appear to support the Aristotelian framework.

So in my dream yesterday, I drew an analogy between these two paradigms (and educational approaches that bridge them) and God's role in the world. On the one hand there is the "Aristotelian" idea that God must be continuously acting in the universe in order for the universe to keep going. On the other hand there is the "Newtonian" idea that God had to act initially to get the universe going, but then, in the absence of a net force, the universe keeps going on its own. So then the big insight (which I don't entirely remember) was how to reconcile the "Newtonian" framework that the universe keeps going on its own with our "Aristotelian" experience that God is continuously acting in the world... or is it the other way around?
Posted by BZ at 9:31 AM 2 comments: