Also, the Howard Dean town hall I went to the other day has been making the news, particularly his harsh words for the ridiculous Baucus bill.

Speaking of Baucus: Today I got to see President Obama at a health care rally at the University of Maryland. (Living in the DC area is great!) As DailyKosTV reports, the crowd wildly cheered the public option, and booed the Baucus bill. I think I was the one who initiated the Baucus-booing! But as you can hear from the video, it took just a fraction of a second to spread around the whole arena, so there is overwhelming sentiment in favor of real health care reform.

Obama's speech at the rally had much of the same content as his speech last week to Congress, but he threw in other stuff specific to the college student audience, including a nod to the bill passed today by the House to fix student loans and financial aid. Obama was introduced by a UMD student who was diagnosed with thyroid cancer and was able to receive treatment that has been successful so far because she was on her parents' insurance, but will need expensive medication for the rest of her life and is going to be shit out of luck when she's out in the world trying to buy her own insurance (due to her preexisting condition) if we don't fix health care now. Let's do it!
Posted by BZ at 7:48 PM No comments: Links to this post

Here at Jewschool, we have covered many calendrical confluences, from the total lunar eclipse on Purim to Birkat Hachamah on Erev Pesach to Ice Cream For Breakfast Day on Tu Bishvat. But all of those pale in comparison to the big one that we’ve been awaiting for years: Rosh Hashanah on International Talk Like A Pirate Day!!!

The 2nd day of Rosh Hashanah fell on September 19, 2001, but that was before The Onion gave us permission to laugh again, so talking like a pirate was the last thing on our minds at the time. Other than that, this year is the first combined Rosh Hashanah / TLAPD since TLAPD was founded in 1995. The next time will be in 2020.

So, to help us prepare for this rare conjunction, here are 10 ways to incorporate Talk Like A Pirate Day into the Rosh Hashanah liturgy:
1) (the obvious one) sound the shofARRRRR!
2) …made from rams stolen from another ship
3) (in communities that read Genesis 21) read the story of HagARRRRRR!
4) (in communities that read Genesis 22 on the first or only day) …al echad heHARRRRRim … vaYARRRRRR et hamakom meirachok.
5) Apples and honey can prevent scurvy.
6) …et yom hazikARRRRRRon hazeh…
7) Throw your enemies overboard for tashlich.
8 ) The HadARRRRR CD is sold out, so get a PIRATED copy.
9) Show up without a ticket.
10) Who shall live and who shall die, who by sword and who by walking the plank! ARRRRRR!!!

If you can’t wait until 2020 to do it all over again, Talk Like A Pirate Day 2013 is the first day of Sukkot; start practicing your lulav swordfights! Also it will be none other than Yom Kippur in 2018; I totally want to lein Jonah that year.

As I mentioned, wedding-related posts are coming at some point. In the meantime, some meta notes on the topic: liberal/egalitarian Jewish marriage is in a period of ferment. If our evolving civilization is characterized by punctuated equilibrium, we are very much between equilibria at least in this particular area. In a few decades or so, I think things may settle down, but in the meantime, there's no universal standard of how to effect an egalitarian Jewish marriage, either practically or conceptually, and the options are multiplying. This means that everyone who gets married has significant decisions to make. The other night I was speaking to someone else who recently got married, and they were talking about the decisions they had made about these ritual matters, based on the specific constraints of their situation.

I should note that my day job currently includes thinking about Lagrangian mechanics. That night, I got up to use the bathroom, but was still mostly asleep, and in the moments my thoughts were adrift, with the Kiddushin Variations intermingling with the calculus of variations, I had an insight that seemed profound at the same time, and in the morning seemed less profound but still worth blogging:

Devising an egalitarian Jewish wedding ceremony is a variational problem. We each have different constraints, and the goal is to find a trajectory that gets us from the initial point to the final point and (at least locally) extremizes the action. Part of the task that each couple undergoes is choosing the appropriate generalized coordinates that take these constraints into account, and then formulating their Lagrangian. Unfortunately, at that point there are no Euler-Lagrange equations to simplify the calculations (and in any case, the equations of motion aren't solvable analytically), so instead we just have to choose and compare possible trajectories by hand.
Posted by BZ at 8:38 PM 6 comments: Links to this post

Tonight I got to see Gov. Howard Dean at a health care "town hall meeting" at Busboys and Poets, where he was answering questions about health care from host Kojo Nnamdi and the audience, and signing his book.

This is the question I would have asked, but by the time I thought of it, the line to ask questions was too long, so I didn't bother:

Sorry I haven't been posting. My only excuse is that I've been busy with just about every type of life transition. A few months ago I was an unmarried high school teacher living in New York, and now I'm a married graduate student, college TA, and rebbetzin living in Maryland (a few feet, or a few inches, from the District of Columbia, depending on where in the apartment I'm standing). And the last time I spent two straight weeks in one place was in May, and (as weddings give way to chagim) the next time won't be until (at least) October.

Now that relative stability is in sight, life feels like this picture I took on Sunday at the Milwaukee airport (immediately after going through the "security" line): 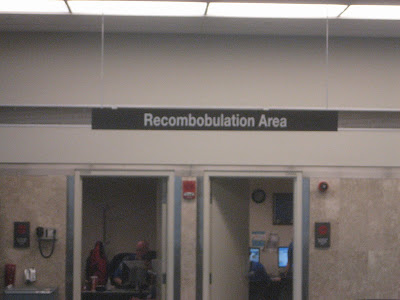 So more regular blogging may return at some point. I know some readers were hoping for posts about weddings, and at some point we'll write up what we did, how, and why. In brief: bilateral kiddushin bishtar with tenaim making each kiddushin dependent on the other, symbolic shutafut-style lifting of a bag of rings, and bilateral kinyan sudar with the rings to acquire the obligations of the ketubah. To learn what all those terms mean, stick around for future posts.

According to his article there, "he advocated ... the abolition of all second days of festivals". So it turns out that, in past posts when I explained my practice of one-day yom tov as minhag avoteinu by describing myself as a "fifth-generation Reform Jew", I wasn't telling the whole truth. I am actually (at least) the seventh generation of my family that has held one day of yom tov!
Posted by BZ at 9:22 PM 10 comments: Links to this post